For all you eager blog followers out there, here are some of the photos of Torres del Paine National Park in Southern Chile, which several of us visited at the end of the cruise before returning home. Thank you to Xinfeng and Tom for contributing these great photos. As you can see, it is an incredibly beautiful place!


On a personal note, I'd just like to thank everyone who has followed the blog and sent me messages during our travels. It's been a pleasure sharing some of the work we do (and fun we have!) with you all.
Posted by Alex at 08:50 2 comments:

A quick update to let you all know that the cruise ended successfully and the scientists are now returning to their respective countries. We are all pleased to be home with our families and looking forward to getting stuck into all the data we have collected in the weeks and months ahead.

Before returning, many of the young scientists on the trip spent a day sightseeing in the beautiful Torres del Paine National Park in Chile. Photos to follow in the coming days...
Posted by Alex at 13:03 No comments:

Finally, blog readers, it's the turn of your blog author to tell you a little bit about his involvement in the DIMES project!

Where do you work and what is your connection to DIMES? 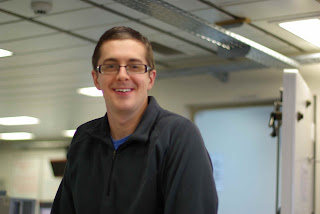 I work at the National Oceanography Centre, Southampton as a DIMES postdoctoral researcher with Alberto Naveira Garabato. My contribution to DIMES is primarily to work on data from the UK mooring array, which forms an integral part of the project.

What’s the purpose of the moorings?

The two-year long deployment aims to uncover some of the underlying mechanisms that lead to mixing in the Southern Ocean. Many previous studies have suggested that ocean turbulence is enhanced when internal waves found between different density layers in the ocean break. We believe that the generation of these internal waves is greater over regions where the sea floor is relatively rough. To test this idea, the DIMES mooring array was located over a 10 km-wide sea floor bump in the Scotia Sea, in a region where the bottom currents are relatively strong. In addition, the moorings allow us to quantify the energy budget of the region, including the transfers of energy between the large-scale currents, eddies and internal waves.

Which sorts of instruments do you use to test these ideas?

In total, there are over 70 individual instruments on the UK moorings. These include current meters which measure water speed and direction and Microcats which measure temperature, salinity and pressure. In addition, we use a number of more sophisticated instruments including an Acoustic Doppler Current Profiler (ADCP) which measures currents at a number of different depth levels simultaneously, and a McLane Moored Profiler which moves up and down the mooring wire obtaining measurements of current speed, temperature and salinity every few seconds. Having such a wide range of different sensors is enabling us to understand the time-varying processes at work.

What sorts of things have you been doing on the cruise?

I have primarily been responsible for the data acquisition and processing of the mooring data. This includes helping the technical team to document, move and clean up the instruments as they come back on board, as well as downloading and quality-controlling the data. I am really looking forward to getting my teeth into the data when I get back to Southampton as we have had a really successful second year with only a couple of instrument failures.

In addition to my work duties, I have also taken some time to write the cruise blog – I hope you have all enjoyed reading it as much as I have enjoyed writing it!

It has been a great opportunity to show to the world a little bit of what we do and to inspire other people to come and work in oceanography. From a science perspective, the Southern Ocean is one of the least well-understood parts of the planet yet it seems to have a critical role both in ocean circulation and in the carbon cycling. I hope that through the words and pictures that people have contributed to the blog we have managed to convey some of our enthusiasm for this fascinating place.
Posted by Alex at 13:54 No comments:

Our final science work was completed yesterday with the deployment of an Argo float towards the northern end of Drake Passage. I spoke to Brian King from the National Oceanography Centre, Southampton, and asked him to tell me a little about the SOLO float we deployed. Here is his account:

"Today we gently lowered into the sea the last of nine floats we have been deploying for the international Argo program. Not unlike a diver's buoyancy control jacket, each float has an inflatable bladder that enables it to sink to 1 km depth, drift for 10 days and then dive a further kilometre before rising to the surface and sending data ashore by satellite. During its cycle it makes measurements of ocean temperature and salinity that will be used to understand the changing ocean on timescales of weeks to decades. These particular floats, deployed on behalf of colleagues at the Woods Hole Oceanographic Institution, join a fleet of over 3000 active floats contributed by over 20 countries, which between them provide data that describe the global ocean with unprecedented detail. In the last 10 years, floats like these have gathered more ocean profiles than the entire history of ocean observing put together. And they don't mind whether its night or day, summer or winter, good weather or bad. Our float will continue its lonely vigil in the cold dark ocean for 5 years, drifting wherever the currents take it, visiting the surface briefly every ten days, until its batteries are exhausted and it can no longer reach the surface or broadcast data. Its mission will then be complete, its task to be taken up by a new float deployed from another research expedition not yet planned." 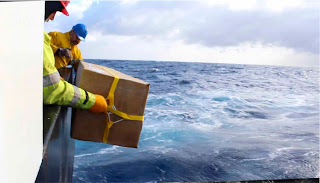 Many thanks to Louis St. Laurent for the photos of the deployment. We are currently steaming northwards towards Punta Arenas, and should reach our berth around 4pm tomorrow. After the completion of the final data processing and compilation of the ever-important cruise report, it will be time to start packing up our equipment...

Well – it had to happen in Drake Passage. After a few weeks of relatively quiet weather, we have finally hit stormy seas. With winds up to 40 knots and 6 to 7 metres of swell, science operations have been suspended. During a brief lull in the weather last night, the ship’s crew and technicians pulled out all the stops to get a CTD cast done in the middle of Drake Passage.

There have been some blog requests for a map of our progress, and I am happy to oblige, dear readers! Whilst the plot looks like a little bit of a spider’s web (including two trips to Stanley), you can see that we have effectively sampled both the North Scotia Ridge between the Falklands and South Georgia and the SR1 repeat line. Unfortunately, weather has meant that our tracer sampling of Drake Passage (where we are currently) has been coarser than we would have wanted but early results from the section are still encouraging.

Making the most of a weather window...

The cruise is now entering its final week, and with a Drake Passage storm due to hit tomorrow, we are working flat-out to get as much work completed as possible before we get stopped by the weather. It looks from the forecasts as if we could be put out of operation for at least a couple of days, meaning the work we do in the next 24 hours could be crucial to our success. We are attempting to complete a south-north Drake Passage section to analyse the cross-stream distribution of the tracer (dye) and find out how much has penetrated across the various ocean fronts that separate the different water masses of this region. Bearing in mind the weather down-time which we know is coming tomorrow, we are not currently doing any VMP profiles, though this could change if the weather ameliorates. I'll update you all soon with our progress...

No, this is not about any of us going swimming in the 3°C seawater! It’s instead about calibrating the Microcat sensors that were placed on our moorings. These instruments were put on the moorings to measure temperature, pressure and conductivity (from which we derive salinity) over a year. In order to check that these values are accurate, we strap the instruments (seen on the picture below) to the CTD frame for a so-called “calibration-dip”. The CTD is then stopped for 6 minutes at a number of different depth levels, during which we obtain measurements of temperature, pressure and conductivity from both the Microcats (which have a relatively slow response time) and from the carefully calibrated CTD itself. This ensures that we are able to detect any drifts or offsets in the Microcat data. 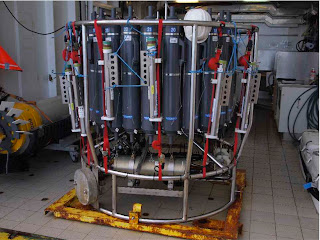